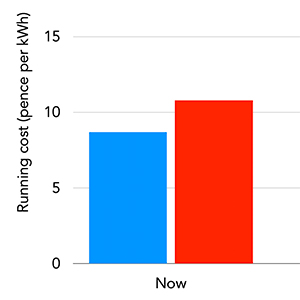 Given the current cost of living crisis, it’s important to understand how much it actually costs to run a home heating system. Otherwise, you risk being fooled by all the misinformation that is available online. We’ve been gathering the latest pricing information for different forms of heating to give a definitive assessment based on prices now, and how they will change in 2023. To compare heating systems on a like-for-like basis, we compare the cost per kWh for oil, gas and different types of electric heating. We show that oil heating is now significantly cheaper to run than gas heating, and the gap is set to grow wider from April 2023, when the Government’s Energy Price Guarantee cap for gas and electricity prices is increased. We show that running an old, inefficient oil-fired or gas boiler many be costing you much more than you think so it makes sense to upgrade. We show that electric heating of all types is much more expensive to run than oil and gas heating, including electric fan heaters, electrically-heated oil-filled radiators, storage heaters, electric fireplaces, halogen heaters and electric underfloor heating. Air source heat pumps are much cheaper to run than conventional electric heating. By delivering much more heating power than the input power, their incredible efficiency helps to offset the high price of electricity per kWh. However, even the most efficient air source heat pumps can only rival the cost of oil heating because electricity costs per kWh are currently so high, and will increase further in April 2023. Rather than moving away from oil-fired heating, we recommend ways in which you can halve your oil heating bills and add value to your home.

You may have noticed that petrol and diesel prices have not experienced the huge increases seen in wholesale gas and electricity prices, and have recently fallen back. Heating oil has mirrored the same trends as petrol and diesel at the pumps, with prices in December falling to levels closer to their five-year average. In sharp contrast, gas and electricity prices have increased dramatically. With the government reducing its support to most UK households from April 2023, many are set to see further painful gas and electricity price increases. As a result, gas heating has lost its position as the cheapest form of home heating and oil-fired heating is now significantly cheaper, as shown in the chart below. This gap is expected to grow significantly from April 2023. 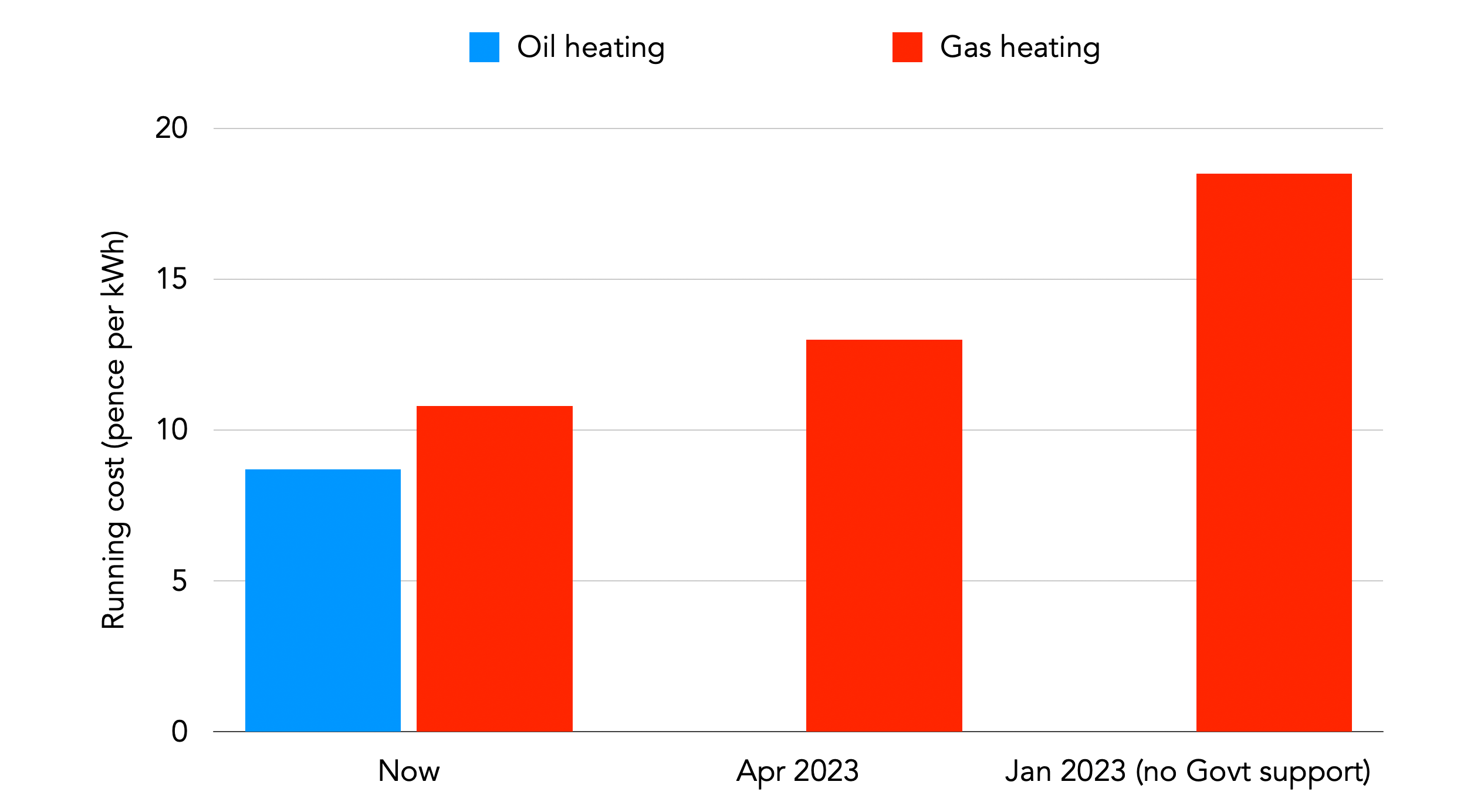 Comparison of the running costs of oil and gas heating

Recently, we were able to source 500 litres of heating oil (kerosene) at a price of £426 inclusive of VAT, which represents a price of 85.2p per litre. One litre of kerosene generates a maximum energy output of 10.35 kWh. With a modern, ultra-efficient boiler with an efficiency of 95%, one litre of kerosene would generate 9.8 kW of useful heat energy. Given the price we paid, the running cost is 8.7p per kWh for oil-fired heating.

Those expecting a dramatic drop in future gas and electricity prices may be disappointed. Out to 2030 and beyond, Cornwall Insight predicts that energy prices will remain about three times their five-year pre-2021 historic average. While it is impossible to predict oil prices, oil-fired heating may remain cheaper than gas heating for the foreseeable future.

Running an old, inefficient boiler means that the cost per kWh is much higher than an ultra-efficient model

We strongly recommend that households running an old, inefficient central heating oil (or gas) boiler should upgrade to a modern, ultra-efficient model. That’s because they are paying much more than they need do. Replacing an oil boiler operating at 60% efficiency with one operating at 95% efficiency makes a huge difference to the cost per kWh, as shown in the chart below. For oil-fired heating, an old boiler would currently cost 13.8p per kWh, compared with only 8.7p per kWh for an ultra-efficient oil-fired boiler. With gas prices being so high, the case for replacing an old gas boiler is utterly compelling. From April 2023, the cost of running a old gas boiler (with 60% efficiency) would be 20.6p per kWh, compared with 13.0p per kWh for a gas boiler (with 95% efficiency). 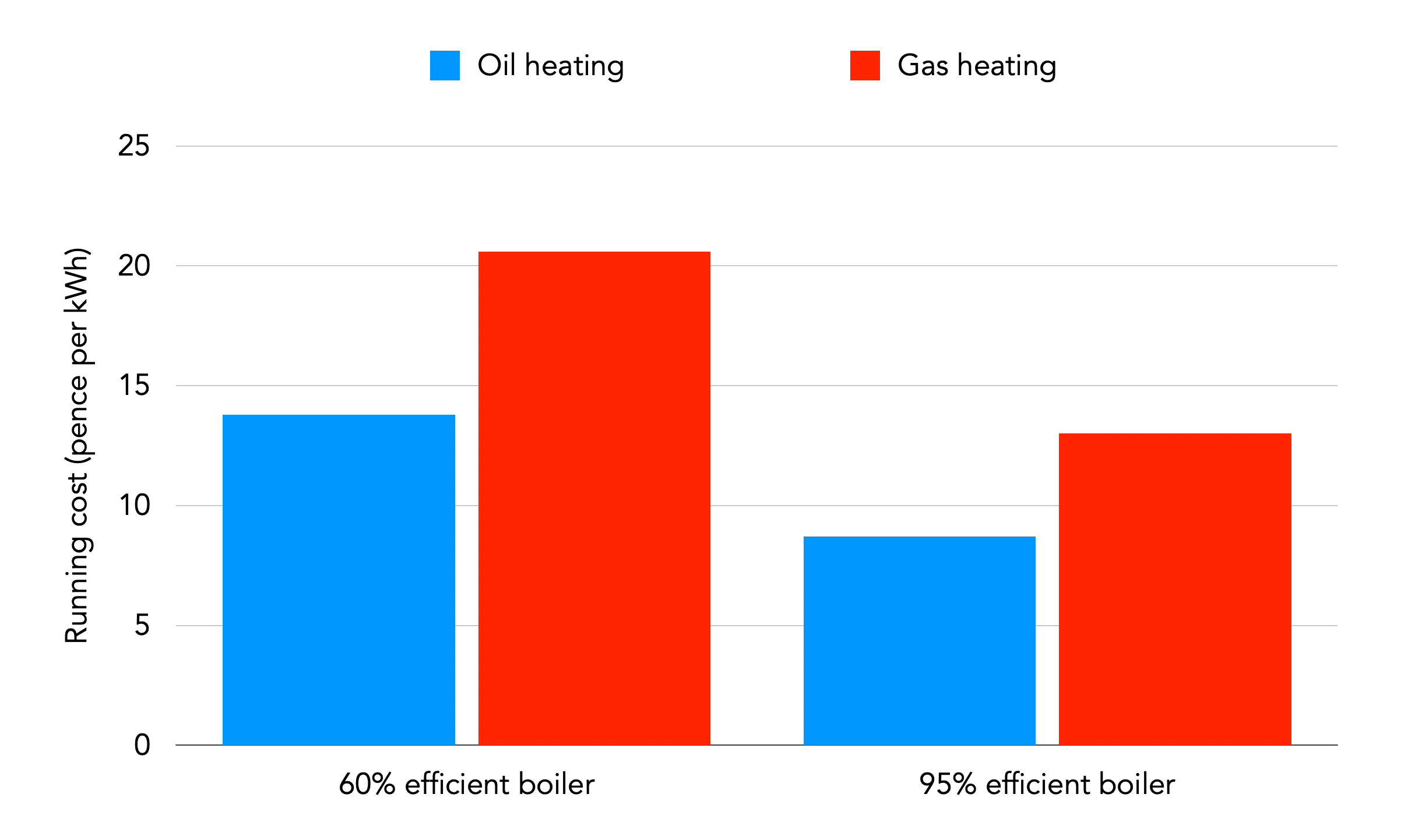 Most forms of electric heating are much more expensive than oil or gas heating, including electric storage heaters

Recent increases in electricity prices, with further price rises to come, is making most forms of electric heating utterly unaffordable to run. Electric heaters often have different names attached to them – such as electric radiators, fan heaters, oil-filled radiators, ceramic heaters and underfloor heating – but they all work in a similar way. They convert electrical power to heat with the same fundamental limitation – an absolute maximum efficiency of 100%. 1 kW of input power will only generate 1kW of heating at most. Even if your electric heating delivers a maximum efficiency of 100%, high electricity prices mean sky-high heating costs. 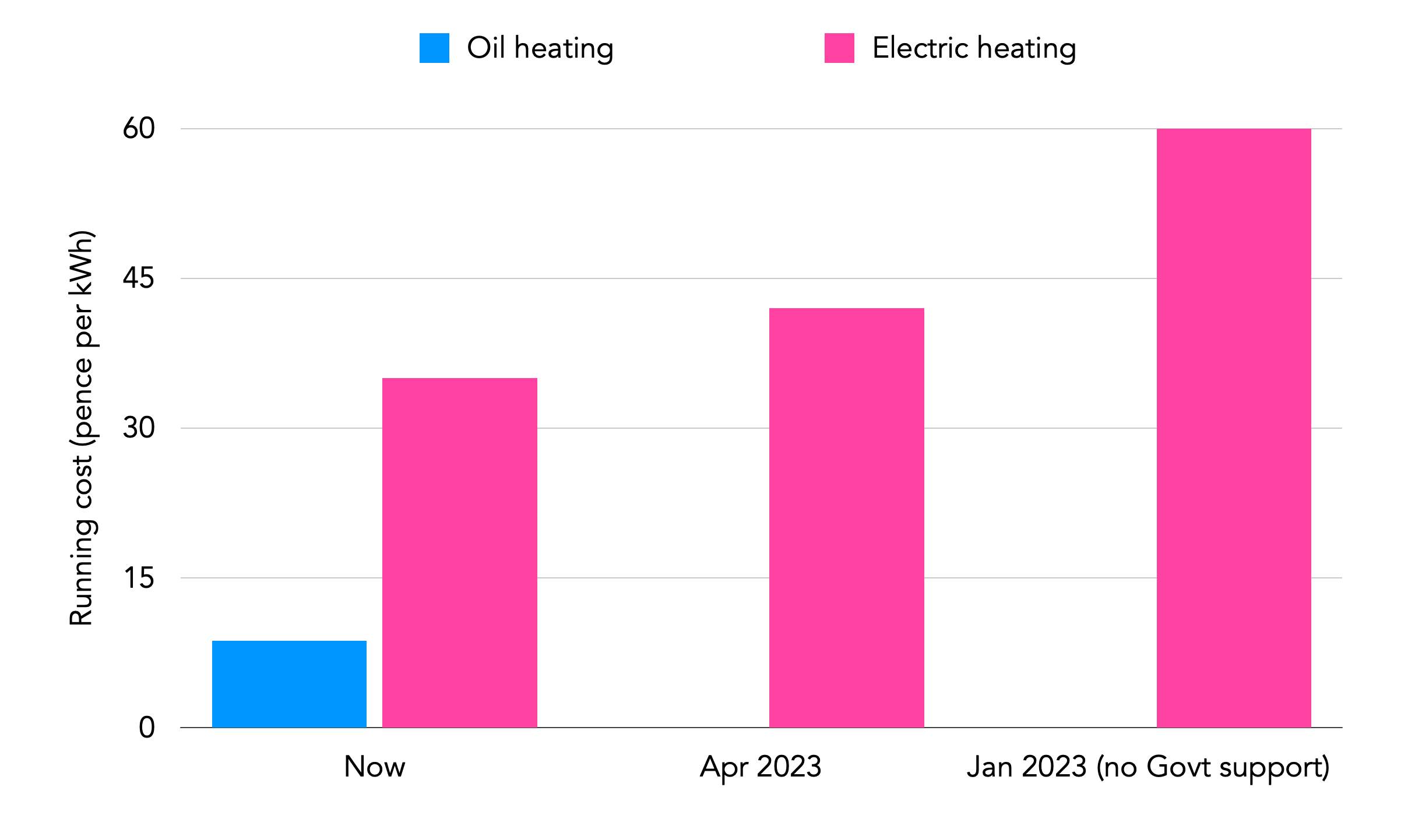 Comparison of the running costs of oil and electric heating

Storage heaters share the same limitation of conventional electrical heating in that 1 kW of electrical power can only generate a maximum of 1 kW of heating, but they have the advantage of operating during the night at off-peak times for households equipped with Economy 7 meters and subscribing to Economy 7 tariffs. However, we have found that Economy 7 tariffs are not that attractive. For example, Bulb charges 22.8p per kWh at night (12.30am to 7.30am GMT) , but charges 38.6p per kWh for the other 17 hours. This is to be compared with 35.1p per kWh for Bulb’s standard electricity tariff. So, there is a significant price to pay, in terms of increased prices for 17 hours, for what are relatively modest benefits for storage heaters.

Assuming 100% efficiency, the current cost of running storage heaters (22.8p per kWh) will increase from April 2023, t0 27.4p per kWh, as shown in the chart below. This is over three times the current cost of oil heating (with an ultra-efficient boiler) with the added penalty of increased electricity prices for 17 hours every day. In the absence of Government support (in the form of the Energy Price Guarantee), storage heaters would cost 39.0p per kWh. Based on current and future electricity prices, we expect to see many households with storage heaters looking to replace their heating systems as the cost of living crisis bites. 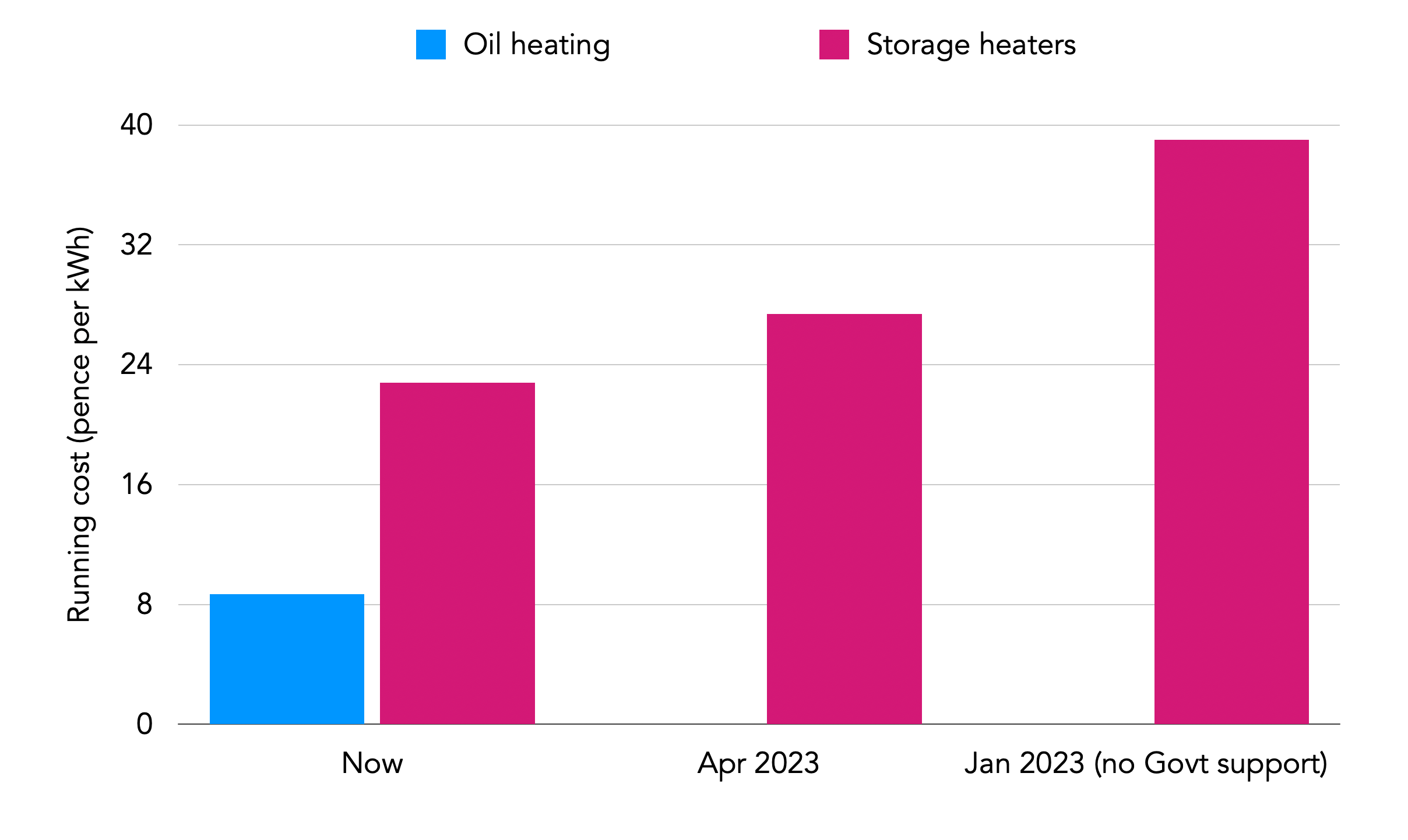 Assuming a standard electricity tariff of 35p per kWh, the cost to run an air source heat pump would currently be 8.75p per kWh, as shown in the chart below. From April 2023, planned electricity price increases will change the running cost to 10.5p per kWh. In the absence of the Government’s Price Guarantee, heat pumps would cost 15.0p per kWh. These costs should be compared with 8.7p for oil-fired heating today with an ultra-efficient boiler. 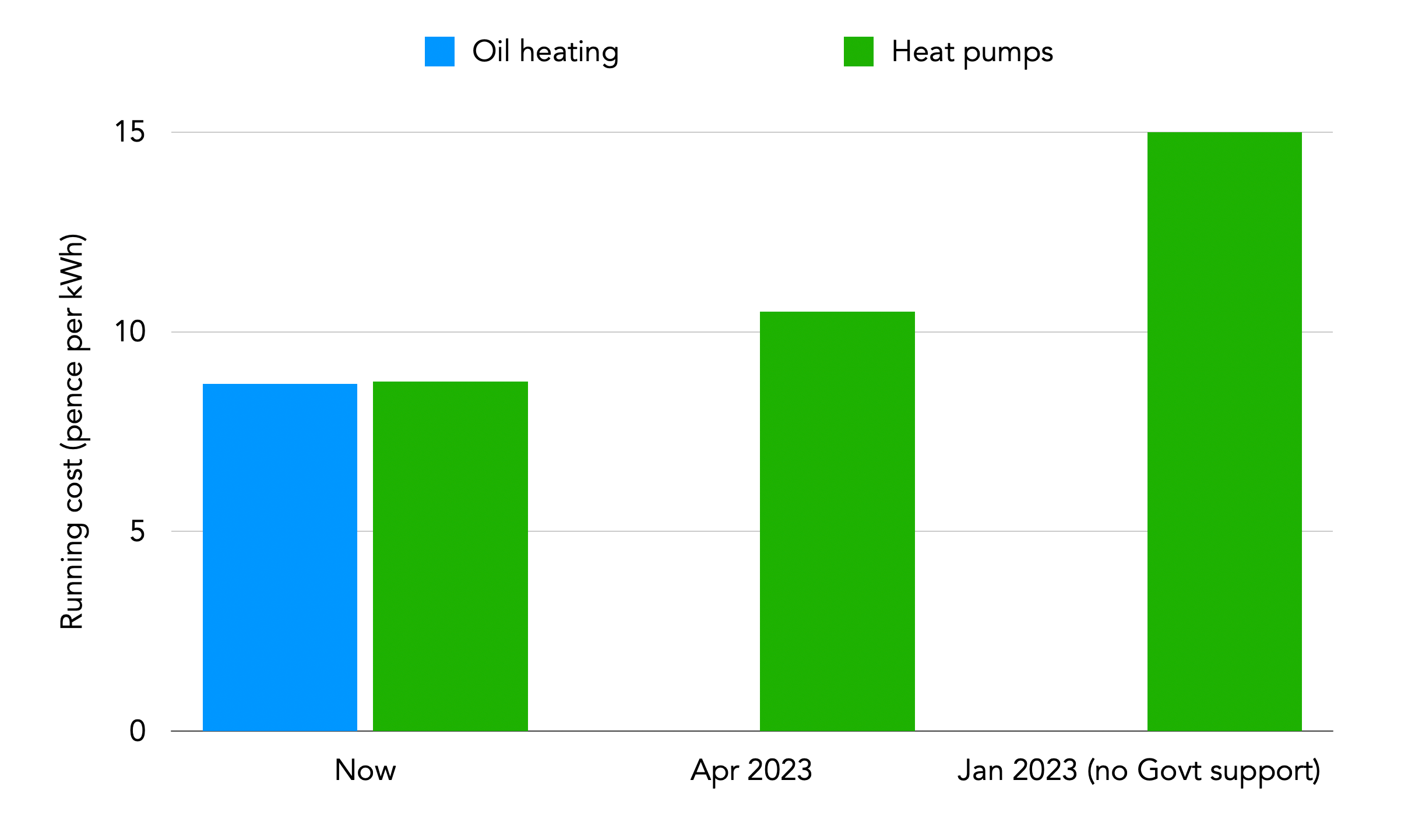 As discussed above, running an ultra-efficient gas boiler currently costs 10.8p per kWh, and this will increase to 13.0p per kWh from April 2023. So, modest reductions in running costs could be achieved by using air source heat pumps instead of gas heating (although installation costs could be substantial). However, there does not seem to be a financial case for upgrading to air source heat pumps from oil heating (particularly with an ultra-efficient oil-fired boiler). This is principally due to very high electricity prices. Electricity prices need to fall significantly compared with the price of heating oil for households to justify upgrading to heat pumps. With electricity prices expected to remain high until 2031 and beyond, we cannot currently foresee the conditions necessary, such as a huge fall in electricity prices or a big increase in global oil prices, to drive the rapid uptake of heat pumps among oil-fired heating households. We will continue to monitor running costs over the coming months and years to provide with our latest guidance.

What does it all mean for households with oil-fired heating?

Oil heating is currently cheaper than gas heating, and the difference in running costs is expected to increase significantly from April 2023. There is not yet a convincing economic case for upgrading from oil-fired heating to air source heat pumps due to very high electricity prices (and high installation costs). Oil-fired heating households seeking to reduce their heating bills should consider:

These have the potential of halving your heating bills, and also significantly increasing the value of your home. For more information, visit our guide: